Posted at 08:23h in Hot Topics by Toby Amidor 1 Comment 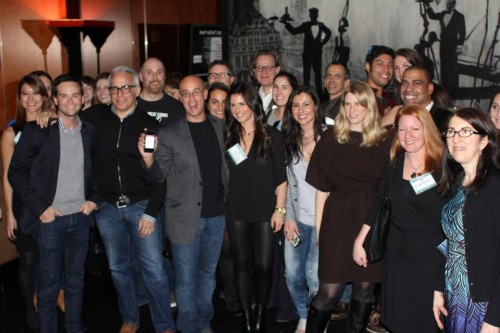 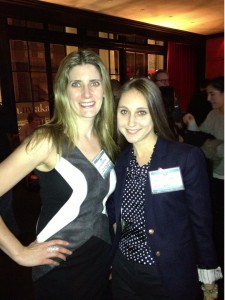 This week Toby and I had the honor of attending a live twitter event through invitation only from our twitter pal and social media guru, Steve Green. The event took place at The Lamb’s Club in NYC (with executive Chef Geoffrey Zakarian), in conjunction with the kick off to New York City’s Restaurant Week and to celebrate Norwegian Cruise line’s newest ship, Norwegian Breakaway.

Tweeting It Up
If you’ve never been to a live tweetup before, it’s the most anti-social social gathering you’ll ever attend. It’s the one time where staring at your phone as you try and engage in conversation with someone, is actually not rude! Toby and I did manage to make some new friends, including a fellow dietitian Alissa Rumsey, the fabulous Foodie International, Alcides who helped us keep track of the appropriate hashtags to use, and Marissa Scime the social media director for Norwegian Cruise Line.

During the chat some of the questions we answered were about our favorite pizza toppings, favorite NYC food icons and the best ceviche we’ve ever had. Of course as dietitians, our answers included lots of veggies on pizza, and agreed that Zakarians ceviche is pretty darn awesome! 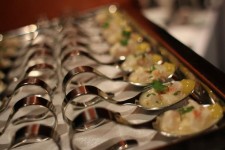 Tweeting & Drinking?!
While trying to tweet, eat and drink all at the same time, we managed to taste Zakarian’s innovative creations. From beef tartar to scallop ceviche, we found ourselves eagerly anticipating what came next. Our favorite treat was the squash soup, which was served hot in cute little shot glasses.

Newest Norwegian Ship
During the tweet up we learned that the newest Norwegian Cruise line ship, the Norwegian Breakaway, will make its first voyage this May from New York City’s West Side Harbor. The ship plans to source all ingredients from New York, and while on board, you’ll feel as if you never left Manhattan. You’ll have to practice moderation as the ship offers numerous dining options, including The Lamb’s Club executive Chef Geoffrey Zakarian’s restaurant, Ocean Blue. 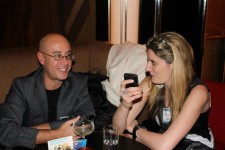 Ready to join in on the fun? You’ll often find Toby and I on #FoodieChats, which takes place every Monday evening at 8pm EST.  Join tonight Monday 1/21/13 for series 1 of Eating By Color – Eating Red. We hope to tweet you there!

Is Pickle Juice The New Sports Drink?
How My Mom & I Became Dietitians….Together